In brief, all block producers have a verifiable random function (VRF) key which they register with the locked stake. These VRFs produce secret randomness which determines when they produce blocks. A priori, there is a risk that block producers could grind through VRF keys to bias results, so VRF inputs must include public randomness created only after the VRF key. We therefore have epochs in which we create fresh public on-chain randomness by hashing together all the VRF outputs revealed in block creation during the epoch. In this way, we cycle between private but verifiable randomness and collaborative public randomness.

The main differences of BABE from Ouroboros Praos [2] are the best chain selection mechanism and slot synchronization assumption i.e.:

In BABE, we have sequential non-overlaping epochs \((e_1, e_2,\ldots)\), each of which consists of a number of sequential block production slots (\(e_i = \{sl^i_{1}, sl^i_{2},\ldots,sl^i_{t}\}\)) up to some bound \(t\). At the beginning of an epoch, we randomly assign each block production slot to a “slot leader”, often one party or no party, but sometimes more than one party. These assignments are initially secrets known only to the assigned slot leader themselves, but eventually they publicly claim their slots when they produce a new block in one.

Each party \(P_j\) has as session key containing at least two types of secret/public key pair:

We favor VRF keys being relatively long lived because new VRF keys cannot be used until well after creation and submission to the chain. Yet, parties should update their associated signing keys from time to time to provide forward security against attackers who might exploit from creating slashable equivocations. There are more details about session key available here.

We assume that each party has a local buffer that contains a set of transactions to be added to blocks. All transactions in a block are validated with a transaction validation function before entering this buffer.

In BABE, we would like to achieve that each validator has the same chance to be selected as a block producer on a slot. Therefore, we define the probability that a validator is selected on a slot as

In order to achieve the eqauality of validators in BABE, we define a threshold parameter as in [2] for the slot assigment:

where \(\ell_{vrf}\) is the length of the VRF’s first output (randomness value).

In this phase, we manually produce the unique genesis block.

In normal operation, each slot leader should produce and publish a block. All other nodes attempt to update their chain by extending with new valid blocks they observe.

At the end of the slot, \(P_j\) decides the best chain with the chain selection rule we give in Section 3.

Starting from first slot, in every \(R\) slots, the new epoch starts. Before starting a new epoch \(e_m\), validors should obtain the new epoch randomness and active validators set for the new epoch.

The reason of including a validator after two epochs later is to make sure that the VRF keys of the new validators added to the chain before the randomness of the epoch that they are going to be active is revealed.

Given a chain set \(\mathbb{C}_j\) and the parties current local chain \(C_{loc}\), the best chain algorithm eliminates all chains which do not include the finalized block \(B\) by GRANDPA. Let’s denote the remaining chains by the set \(\mathbb{C}'_j\). If we do not have a finalized block by GRANDPA, then we use the probabilistic finality in the best chain selection algorithm (the probabilistically finalized block is the block which is \(k\) block before than the last block of \(C_{loc}\)).

We do not use the chain selection rule as in Ouroboros Genesis [3] because this rule is useful for parties who become online after a period of time and do not have any information related to current valid chain (for parties always online the Genesis rule and Praos is indistinguishable with a negligible probability). Thanks to Grandpa finality, the new comers have a reference point to build their chain so we do not need the Genesis rule.

It is important for parties to know the current slot for the security and completeness of BABE. For this, validators can use their computer clocks which is adjusted by the Network Time Protocol. However, in this case, we need to trust servers of NTP. If an attack happens to one of these servers than we cannot claim anymore that BABE is secure. Therefore, we show how a validator realizes the notion of slots without using NTP. Here, we assume we have a partial synchronous network meaning that any message sent by a validator arrives at most \(\D\)-slots later. \(\D\) is an unknown parameter.

Each party has a local clock and this clock is not updated by any extarnal source such as NTP or GPS. When a validator receives the genesis block, it stores the arrival time as \(t_0\) as a reference point of the beginning of the first slot. We are aware of the beginning of the first slot is not same for everyone. We assume that the maximum difference of start time of the first slot between validators is at most \(\delta\). Then each party divides their timeline in slots and update periodically its local clock with the following algorithm.

In the end, the validator adjusts its clock by mapping \(sl\) to output of the median algorithm.

The following image with chains explains the algorithm with an example in the first epoch where \(s_{cq} = 9\) and \(k=1\): 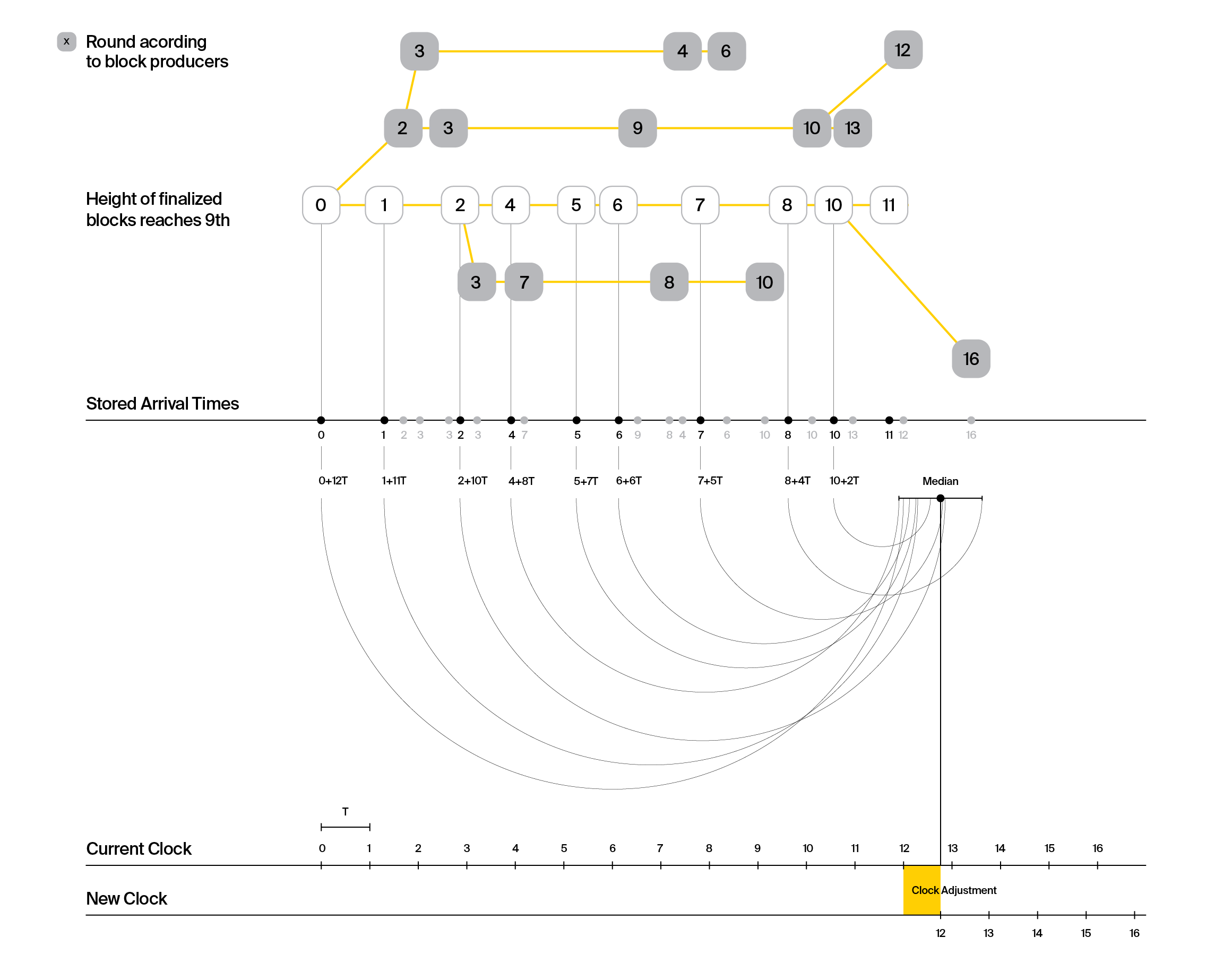 This lemma says that the block production may stop at most \(\theta\) at the beginning of the new synch-epoch.

Having \(\theta\) small enough is important not to slow down the block production mechanism a while after a sync-epoch. For example, (a very extreme example) we do not want to end up with a new clock that says that we are in the year 2001 even if we are in 2019. In this case, honest validators may wait 18 years to execute an action that is supposed to be done in 2019.

For validators who were offline at some point during one synch-epoch, they can adjust their clock temporarily (till the next synch epoch) with the following algorithm.

With the temporarily clock adjustment, we can guarantee that the difference between this new clock and an honest parties clock is at most \(2\delta_{max} + |\Sigma|\).

We note that during one sync-epoch the ratio of such offline validators should not be more that 0.05 otherwise it can affect the security of the relative time algorithm.

We give the definitions of security properties before jumping to proofs.

The honest chain growth (HCG) property is weaker version of CG which is the same definition with the restriction that \(sl_v\) and \(sl_u\) are assigned to honest validators. The parameters of HCG are \(\tau_{hcg}\) and \(s_{hcg}\) instead of \(\tau\) and \(s\) in the CG definition.

We analyze BABE with the NTP protocol and with the Median algorithm.

We first prove that BABE (both versions) satisfies chain growth, existential chain quality and common prefix properties in one epoch. We also show the chain density property for the BABE with median. Then, we prove that BABE is secure by showing that BABE satisfies persistence and liveness in multiple epochs.

Proof: We need to count the honest and good slots (i.e., the slot assigned to at least one honest validator and the next \(\D\) slots are empty) (Def. Appendix E.5. in [Genesis]) to show the HCG property. The best chain grows one block in honest slots. If honest slots out of \(s_{hcg}\) slot are less than \(s_{hcg}\tau_{hcg}\), the HCG property is violated. The probability of having an honest and good slot is \(p_hp_\bot^\D\).

We find below the probability of less than \(\tau_{hcg} s_{hcg}\) slots are honest slots. From Chernoff bound we know that

Assume that the last block of the previous sync-epoch is \(B\). So, we only consider the chains that are constructed on top of \(B\). Consider a chain \(C\) which has finalized blocks spanned in subslots \(sl_u\) and \(sl_v = sl_u + s_{cd}\). The longest subchain produced between \(sl_u\) and \(sl_v\) is \(h \geq 2m + \ell\) becuase of the honest chain growth among the chains constructed on top \(B\). The longest subchain with more malicious blocks than the honest blocks is possibe with \(m\) malicious blocks and \(m\) honest blocks. However, this chain can never beat the longest subchain produced at the end of \(sl_u\) except with probability \(\frac{1}{2^\ell}\). This means that there is not any subchain that has more malicious block and can be finalized except with a negligible probability. Therefore, all finalized chains in a synch epoch has more honest slot.

We note that we need the chain densisty property only for the BABE with the median algorithm.

Proof (sketch): If \(k\) proportion of a chain does not include any honest blocks, it means that the malicious slots are more than the good and honest slots between the slots that spans these \(k\) blocks. Since probability of having a good and honest slots is greater than \(\frac{1}{2}\), having more bad slots falls exponentially with \(k_{cq}\). Therefore, the ECQ property is broken in \(R\) slots at most with the probability \(e^{-\Omega(k_{cq})}\).

Since \(k > 2k_{cq}\), the last \(k_{cq}\) block of includes at least one honest block. Therefore, the randomness includes one honest randomness and the adversary can have at most \(s_{ecq}\) slots to change the randomness. This grinding effect can be upper-bounded by \(s_{ecq}(1-\alpha)nq\) where \(q\) is the hashing power [2]. The randomness generated by an epoch is finalized at latest one epoch later thanks to the common prefix property. Similary, the session key update which is going to be used in three epochs later is finalized one epoch later before a randomness of the epoch where the new key are going to be used starts to leak. Therefore, BABE with NTP is persistent and live.

In this section, we find parameters of two versions of BABE to achieve the security in BABE.

The parameters below are computed with the code in https://github.com/w3f/research/blob/master/experiments/parameters/babe_NTP.py. In this code, we choose the parameter \(c\) not only according to security considitions but also according to having in expectation twice more single leader than multiple leaders.

It is resistant to (6 - block generation time) second network delay

It means: Prun the last 140 blocks of the best chain. All the remaining ones are probabilistically finalized

If we want more network resistance, \(e.g.,\D = 1\), the parameters should be selected as follows:

It is resistant to (12 - block generation time) second network delay

It means: Prun the last 172 blocks of the best chain. All the remaining ones are probabilistically finalized

BABE with the Median Algorithm¶

The parameters below are computed with the code in https://github.com/w3f/research/blob/master/experiments/parameters/babe_median.py

k = 140 It means: Prun the last 140 blocks of the best chain. All the remaining ones are probabilistically finalized

Some Notes about clock drifts: http://www.ntp.org/ntpfaq/NTP-s-sw-clocks-quality.htm#AEN1220 All computer clocks are not very accurate because the frequency that makes time increase is never exactly right. For example the error about 0.001% make a clock be off by almost one second per day. Computer clocks drift because the frequency of clocks varies over time, mostly influenced by environmental changes such as temperature, air pressure or magnetic fields, etc. Below, you can see the experiment in a non-air conditioned environment on linux computer clocks. 12 PPM correspond to one second per day roughly. I seems that in every 10000 second the change on the clocks are around 1 PPM (i.e., every 3 hours the clocks drifts 0.08 seconds.). We can roughly say that the clock drifts around 1 second per day. If we have sync epoch around 12 hours it means that we have 0.5 second drift and 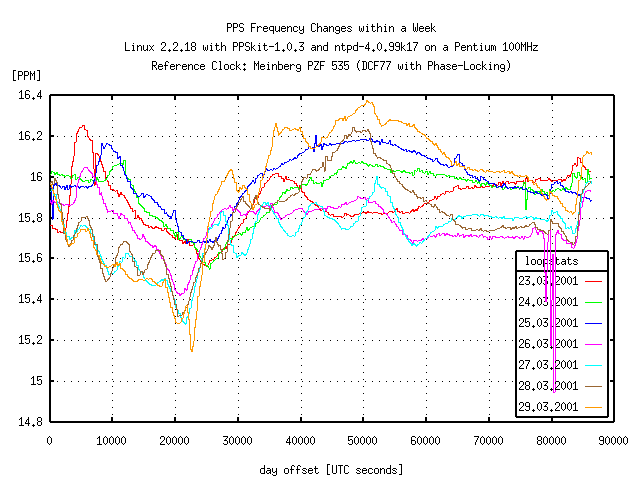 Figure. Frequency Correction within a Week